A Better Way to Pace the Heart?

For the past 60+ years, cardiologists and surgeons have been implanting pacemakers by passing an insulated wire through the veins till it reaches the apex of the right ventricle, where it stimulates the heart muscle.

Over the past several decades, we have learned that right ventricular pacing has many unintended consequences. It causes atrial fibrillation, and it weakens the heart’s strength, which can lead to congestive heart failure. Attempts to correct these failings by simultaneously pacing the muscle in the right and left ventricle (biventricular pacing) are partially successful, but still fail in a third of all patients. 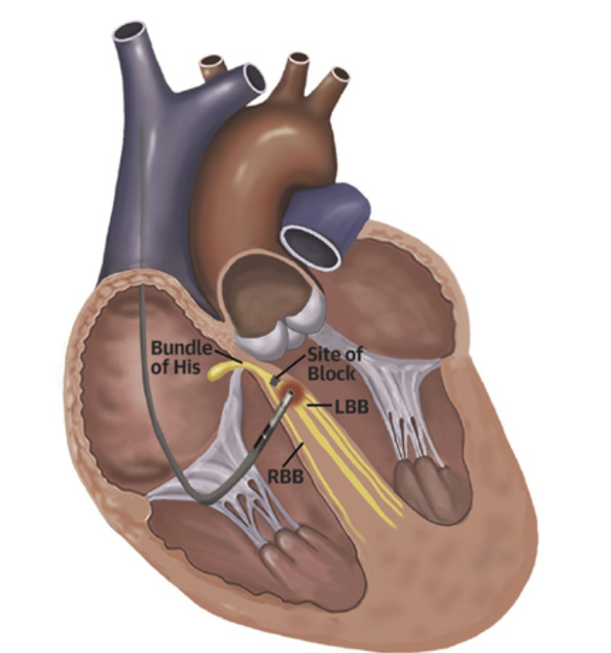 Harnessing the heart’s own electrical system by stimulating the natural conduction of electricity through the Bundle of His produces excellent results when it works, but it is frequently not possible to achieve pacing with this method, and it sometimes fails over time.

In 2017, a new method of pacing heart’s natural electrical conduction system instead of heart muscle was reported. With this new method, the heart’s electrical system is stimulated by a pacemaker lead with a tiny corkscrew at the tip which is screwed through the heart muscle until it reaches the left bundle conduction tissue in the left ventricle. This method is successful over 95% of the time, and results in normal contraction of the left ventricle of the heart. Early reports show much less atrial fibrillation than traditional right ventricular pacing, and improved heart function even when compared to simultaneous right and left ventricular (biventricular) pacing.

Dr. Jay Erlebacher has been successfully performing left bundle pacing in nearly all his pacemaker patients since January 2021. As a physician and engineer, he has been inventing new methods and devices to make insertion of left bundle pacing leads faster and more precise. Many cardiologists believe that as more positive data is published, and as the technique becomes more standardized, that left bundle pacing will replace right ventricular and biventricular pacing for most patients.